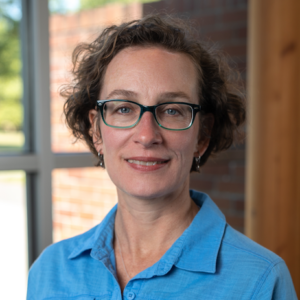 Carrie Ebling is a self-professed anatomy geek with Gray’s Anatomy being the first coffee table book she ever owned. She became interested in massage therapy and chiropractic after witnessing the profound effect hands-on therapies had on the family horse and dog when she was growing up. She has been working on bodies since the late 90’s, balancing art and science to create individualized sessions that get people back to doing whatever they love.
She joined UWS in 2006 with the inaugural class of massage therapy students, began assisting in chiropractic sciences courses in 2008 and became a full-time faculty member in 2017. Additionally, she maintains a private practice where she sees patients part-time when she’s not on campus teaching in the rehab series, extremity orthopedics and muscle testing.
She can often be found on weekends sprucing up some landscaping or honing her gardening skills, watching a Timbers game and walking through various neighborhoods in Portland enjoying the changing seasons. She is an avid seasonal eater and loves the access to farm fresh food that Portland has to offer. Her partner is an amazing cook and together they enjoy hosting dinner parties and playing cards with friends.
RSS FeedUWS TwitterUWS Facebook PageUWS YouTube ChannelUWS LinkedIn PageUWS Instagram