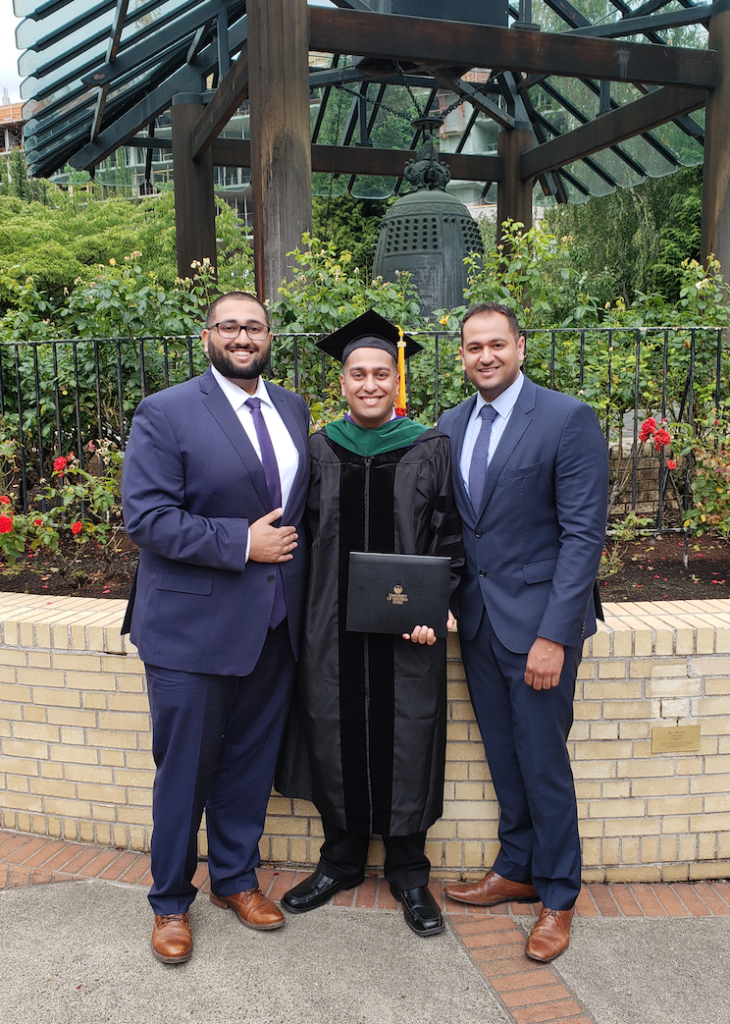 For many people, family is more than shared DNA and holidays. We often share habits, hobbies, quirks and interests. This trend is uniquely obvious in a band of brothers whose interest in the human body and their desire to help others brought them all to University of Western States for the Doctor of Chiropractic program.

This wasn’t the first time Imran, Aaqil and Aslam Moledina had a common interest. “All three of us grew up with similar interests and hobbies,” Aslam explains. “We did a lot of hands-on work growing up and also love to play basketball.”

In fact, playing basketball gave one of these brothers firsthand experience with what chiropractic care can offer people. “I had hurt my back playing basketball in my fourth year of university, and I went to go see a chiropractor,” Aaqil says. “I stumbled into his office not being able to walk properly and walked out with less pain, all in 30 minutes.”

The sport also inspired elder brother Imran. “Playing competitive basketball my whole life, I knew I would be in a field related to sport. In 2010, I suffered a severe knee injury. Through my rehabilitation, I learned I had a true calling toward the realm of physical medicine,” he remembers. “It was an easy decision for me to pursue a career in chiropractic, as I loved the hands-on and patient-centered approach.”

Imran’s interest led him to UWS. As he shadowed chiropractic doctors in Calgary, Alberta, Canada, he noticed the difference between UWS grads and other doctors. “The school’s approach to evidence-informed, patient-centered care is the way I wanted to practice,” he says.

Aaqil wasn’t as certain what he wanted for his career. He explored UWS when Imran was looking at schools and soon realized chiropractic was what he wanted to do as well. “When the opportunity arose to consider a profession where I can actually physically help someone with my hands, I jumped on it,” he says. “It’s a very rewarding profession.”

Aslam also wanted to work with the human body and originally considered becoming a physical therapist. Imran suggested he consider chiropractic instead. “I had no previous experience with a chiropractor and had the same misconception a lot of the general population has,” Aslam admits. “I then started researching UWS and their evidence-based approach to chiropractic care.”

With Imran halfway through the program, Aaqil and Aslam headed to Portland, Oregon, to move in with him and begin their program at UWS. “It was an easy decision for them to move to Portland,” Imran says. “Both the school’s and city’s reputations preceded them.”

Living together, however, wasn’t easy at first. Aslam and Aaqil had never lived away from home, and it took some time for the brothers to adjust to cooking, cleaning and paying bills on top of studying. But soon they were able to coordinate their schedules and chores.

“In this time we got to learn a lot about ourselves and each other,” Aslam says. “I was close with my brothers before starting at UWS, but I feel a lot closer to them now.”

Aaqil appreciates having family connectedness even while studying far from home. “I walked right into living with my brothers and having the same amount of support I’ve had in my life since the beginning,” he says. “I wouldn’t have changed a thing.”

That support continued into their studies as well. “My favorite part of being at UWS with both my brothers was that we could bounce ideas off each other,” Aslam says. “I had the opportunity to study with my younger brother for exams, as well as help my older brother review content that he learned previously in the program.”

Imran has now graduated from UWS and practices in a sports therapy clinic in Calgary, but he still keeps an eye on his brothers. “Now that they are further through the program, there’s a sense of competition of who’s the best,” he says. “However, we all know that they have to keep up with their elder brother!”

Aaqil has a couple terms left at UWS, but Aslam has just finished his studies and plans to join Imran in Calgary. It may be the end of an era for the Moledinas, but they’ve treasured their chance to be at UWS together and prepare for careers that allow them to heal others.

“We want to help people, and we are great with our hands,” Aaqil says. “Chiropractic is almost the perfect profession for us to do what we do best, and I’m glad to have had my brothers through it all!”

At University of Western States, the doctorate of education in sport and performance psychology with a clinical mental health counseling specialization (EdD-SPP, CMHC) is uniquely designed for students who are simultaneously seeking counseling licensure and advanced sport and performance psychology training to open the door to a wide array of career options. Learn more about the integrated degree from the program directors, Dr. Sarah Castillo and Dr. Michelle Cox. #UWSLife #sponsored
www.youtube.com/watch?v=y4HTVTr0YOU ... See MoreSee Less

On June 18 and 19, UWS staff and students from the Student American Black Chiropractic Association (SABCA) hosted an information table at the annual Juneteenth Oregon Celebration. The two-day event brought a few thousand people to Lillis Albina Park to celebrate and commemorate June 19, 1865, a day that marked the emancipation of enslaved people in Texas (a full two years after the Emancipation Proclamation).

Staff and students shared about UWS degree programs, services available at the Connected Whole Health clinic, and discussed opportunities for partnership with the many attendees who stopped by the booth. ... See MoreSee Less

University of Western States is happy to call Portland, Oregon home. The city of Portland is a vibrant hub of arts, food, music and culture. It’s not surprising the surrounding suburbs offer a similar charm, all within 30 minutes of campus!

If you’re interested in moving to the Portland area, but do not necessarily want to live within city limits, check out some of the highlighted areas both in Oregon and across the bridges to Washington state. www.uws.edu/2022/03/04/portland-suburbs/?fbclid=IwAR3EKnTi3Z8zgr8UjmrJRzAdrlIb3z8vFsv3haAFYSEljh9... ... See MoreSee Less

University of Western States is located in Portland, Oregon. 🌹The Rose City is a go-to destination for those who want to soak up and experience all that makes the beautiful Pacific Northwest special. Day trips ranging from visiting the Oregon Coast, Columbia River Gorge, Smith Rock, Mt Hood and more await.