The Hood to Coast relay is a massive event with more than 1,000 teams. At 12 runners and two vans per team, that’s about 12,000 runners and 2,000 vans. The race begins at Timberline Lodge in Government Camp, Oregon and finishes in Seaside, Oregon, spanning 199 miles.

Bradley Crowe, University of Western States (UWS) 11th quarter doctor of chiropractic (DC) student, was one of 12 runners to represent UWS in the annual relay. The team took 10th out of 100 teams in their division. Crowe recaps the relay and the massive success of the participating UWS students and volunteers. 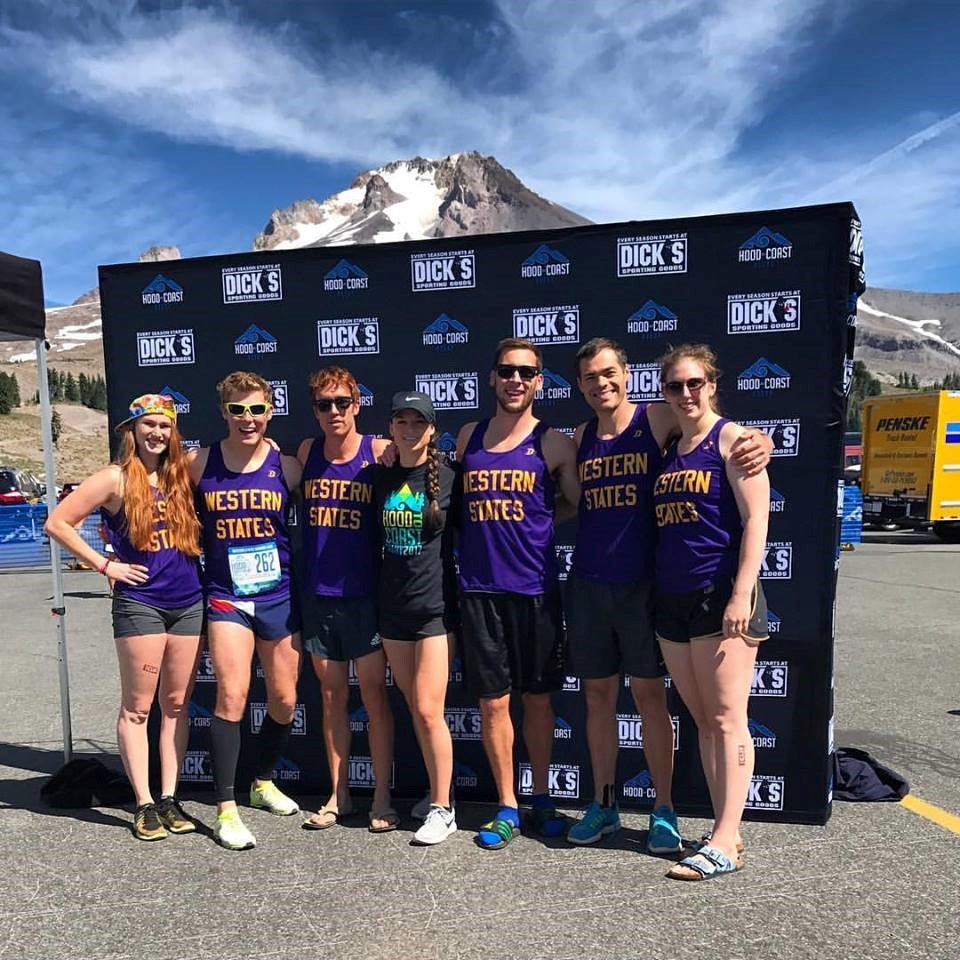 Last year, I was in van one, so this year I was excited to be in van two and have the chance to experience the other half of the race. With an 11:45 a.m. start time, it meant that van two got to have a late start. We loaded up with food, sleeping bags and spare clothes and hit the road around 2:30 p.m. to head to Sandy, Oregon to meet the van one crew who kicked things off for the team. We were lucky enough to have Dr. Lester Partna, UWS associate professor, drive for this first section of the race. The drive out to Sandy was pretty normal, but as soon as we got to Sandy High School, it was chaotic. There were hundreds of people and vans everywhere with a loud speaker blaring out team names as they came into the transition area. Lots of vans were painted with creative team names such as “Hood to Toast and Eggs and Bacon,” “Gone with the Winded” and “Between a Walk and a Hard Pace.”

One of the hardest parts of the whole event is the waiting. The first runner from van two, Emily Kreifels, 7th quarter DC student, was ready to go, but we didn’t know exactly when our runner from the first leg would arrive. We managed to find some shade and waited as long as possible before braving the hot sun. Once the transition was made, things went pretty smoothly for the rest of the leg. The only downer was that we couldn’t get Dr. Partna’s running playlist to play!

I had the last leg of this section of the relay and the view was gorgeous. We ran along the Springwater Corridor all the way to Waterfront Park and then along the Esplanade to the Hawthorne Bridge. The start of the leg was during twilight and it quickly transitioned to pitch black. With no street lights along the trail, all I could see ahead of me was a train of little blinking red lights from the other runners. One of the best and most competitive elements of this race are “kills.” Most vans keep track of how many people each runner passes and then scores them as kills with hash marks on the side of the van. I managed to get 45 kills in this section, so I was pretty pleased.

We dropped off Dr. Partna and picked up Raquel Osborn, UWS student services coordinator, at around 9:30 p.m. After a quick pit stop for food and bathroom breaks, we blasted off to St. Helens for the next exchange. At least that was the plan…construction on I-84 meant that we were stuck in bumper-to-bumper traffic for 30 minutes. Oops! Eventually, it cleared and we made up good time to St. Helens. The exchange was at the fairgrounds, so there were hundreds of vans parked all over the place as well as designated sleeping areas in the fields. The seats in the van folded down to make a large flat area, so a few people threw down blankets and slept in the back of the van. Matt Boetcher, Q11 DC student, Kelsey Woodland, Q11 DC student and I grabbed some sleeping bags and headed out to the field. I checked in with van one and estimated they would be arriving at the exchange at 1:15 a.m., giving me just over an hour to rest. I closed my eyes, but was too wired to sleep. I got the call from van one that they were getting close, so I hopped up to get Emily ready. The site at the fairground was all pretty surreal. The massive crowds waiting, the loud speakers blaring incoming runners and hordes of people curled up in the fetal position just trying to get a few precious minutes of sleep. After waiting for what seemed an eternity, we finally made the exchange and were back on duty. The start of the race the following day can be as early as 5 a.m. and there are also teams that gather with the crowd participating in the Hood to Coast event. To begin, we were behind all of them on the small back country roads around St. Helens. Traffic moved alright, until it was about a mile to the transition zone. There, it turned into a crawl as everyone maneuvered to pickup and drop-off runners. As we sat a half mile from the exchange, I looked out the window just in time to see Emily running by. I leaped out and started running along with her – officially, the exchange can’t happen until the exchange-zone itself. Once I got the runner’s band in the designated area, I settled into a rhythm on the long and steep climb, but almost immediately got passed by another runner. He moved about 10 meters ahead. I slowly worked my way back and was able to overtake him halfway through the leg. For me, this little victory was one of the highlights of the race.

Once at the exchange, Matt took off for the hardest leg of the event. This leg consists of a long gravel section and due to last minute changes, the leg had gone from eight to 11 miles. Matt is not a runner, but I don’t know what it is about running at night…he becomes a monster! The transformation in Matt was my favorite part of the whole event! When he finished his leg, he radiated with excitement.

The next few legs of the relay followed the same pattern of getting stuck in traffic and a runner jumping out a half mile or so early to make the exchange. At around 6 a.m., we had reached the town of Mist, Oregon and cell reception was getting spotty. Fortunately, van one was there to meet us and was ready to roll. We cruised off to the final major van exchange near Olney. The only problem was that there was only one road in the area, so we were still stuck behind all of the traffic waiting for runners. Argh! Eventually, we made it to the exchange where breakfast was being served. Here, the team split up a little bit so that everyone could take care of their own needs. The back seats of the van went down again so that a few people could sleep. There was also a coffee hut and even a place that had bacon and eggs. This was probably the most stressful exchange, as we had no idea when the other van would show up and now there was no cell phone reception at all. However, we were equipped with little hand radios, so one person would wait up by the exchange so that they could radio back to the rest of the team when our van arrived. Looking at the map, we realized that the next leg was a short one, so we decided to leave early so that we could actually make it to the exchange zone before our runner.

There was a little more room at most of the exchanges now as the teams had become more spread out at this stage of the race. However, as time ticked on, the heat from the sun got brutal and there was hardly any shade on many parts of the course. We started stopping in the middle of the leg to check on our runner and pass them some much needed water. Finally, it came to me on the glory leg. Starting off near the top of the hill, I had a short climb followed by a long decent down to Seaside. Once I crested the hill, I could see all the way out to the ocean – definitely another highlight of the race. Finally, I hit the flats on the outskirts of Seaside and out to the Promenade. As I rounded the corner, they called out our name and van one ran out to join me as we crossed the line and finally finished our collective 199 miles.

The University of Western States team finished around 3:15 p.m. on Saturday with a finishing time of 27:22 placing us 10th in our category. After getting some team photos and sharing a few stories, it was time to hit the ocean. We collectively hobbled out to the water and only when it was too late did we realize how cold the ocean still was despite the heat of the day!

Huge thanks to UWS for supporting the team and special thank you to all of our van drivers and volunteers who so graciously donated their time so that we could participate in this big crazy adventure: Dr. Partna, Dr. Savannah Shortz, Mason McCloskey, Ross Robarge and Jeff Prause. Another special thank you to Raquel Osborn, who not only was key to organizing the event, but also volunteered to drive. Thank you so much!

To view a detailed map of the relay course the teams follow, visit the Hood to Coast website.