In May 2015, University of Western States (UWS) launched a partnership with the Returning Veterans Project (RVP), a nonprofit organization that connects local post-9/11 war zone veterans who took part in Operation Iraqi Freedom, the Iraq War and Operation Enduring Freedom or the Afghanistan War, as well as their families, to free health and wellness care.

RVP has a health care network of more than 335 licensed providers who incorporate integrative approaches to treating the physical and mental scars of war.

“The RVP is concerned about the veterans as a whole, not only their physical health and mental health, but all of the aspects that play into wellness,” Eric Polgar, the UWS director of undergraduate studies and the massage therapy program said. “This is right in line with an objective of the university – to provide integrated health care for the whole person.”

When UWS partnered with the RVP, the university became the largest health services provider in the RVP network, providing 28 hours of free chiropractic care and massage services at the university campus clinic each week. Since June 2015, UWS has had more than 300 combined visits for both chiropractic and massage care and nearly 50 visits from January to February 2017 – at no charge to veterans or members of their families.

The massage and chiropractic services provided by UWS are especially impactful for these veterans because of the types of injuries they sustain while in combat. 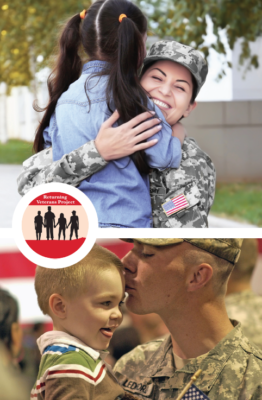 “The weight of all the gear they wear while walking on unpaved roads and mountain trails for miles and miles takes a toll on the head, neck, shoulders and feet,” said Rayna Dorsey, licensed massage therapist and UWS student massage supervisor. “They ride in vehicles that lack suspension on unpaved roads, which is incredibly jarring to the entire body. We see lots of soft tissue conditions that respond well to massage and chiropractic care.”

One such patient, Chris Thompson, who has been receiving care from UWS since 2016, was discharged from the Navy due to injuries he sustained. He served in the Navy as a damage control firefighter on an aircraft carrier from 2007 until 2011 during Operation Enduring Freedom and Operation Iraqi Freedom.

Thompson, who is 100 percent disabled from his military work, also has a genetic disorder called Ehlers-Danlos syndrome, a severe connective tissue disorder.

He also suffers from bilateral arthritis and degenerative disc disease. He has sought treatment for these conditions at UWS and has noticed positive outcomes.

“If I didn’t have the RVP and Dr. Armington at UWS, it would have been a bigger uphill battle to get relief,” Thompson said. “The chiropractic care helps immensely with my lower back and hip pain and it has gotten under control. Being seen regularly at the clinics allows me to be comfortable.”

When he was discharged from the military, Thompson was on 28 different medications for his pain. Since discovering the Returning Veterans Project three years ago and receiving care at UWS, he has been able to eliminate all his prior medications and relies solely on non-pharmacological pain management.

Though the Returning Veterans Project focuses on post-9/11 veterans, UWS will provide care for any veteran.

“At UWS we have said that if we get a veteran that is unable to access care that is pre-9/11 and is available to come during our clinic hours, we do not turn them away,” said Dr. Stanley Ewald, associate dean of clinical internships.

Dr. Ewald, who has friends and family who are service members, underscores the significance of helping veterans.

“It’s important for us to be supportive of these veterans. They served their country and did what was expected of them. And we need to be there for them wherever and however we can.”

Currently, there are 34 students at UWS who are either veterans or active members of the military. These students are honored and grateful for the university partnership with the RVP.

“I love it. It makes me really thankful,” said Sara Hamill, a sixth quarter student at UWS. “I am proud of UWS and proud to be part of the community.”

Hamill joined the Navy when she was eighteen during the Cold War and trained to be a Russian interpreter. She was inspired to become a chiropractic physician and to help veterans after witnessing the impact of chiropractic medicine and massage care first-hand on her son, a Marine veteran, who lost a leg in Afghanistan.

“Seeing the difference that hands-on contact had in my son’s healing was really, really impactful,” Hamill said. “Touch and massage had such a profound effect on him that he was willing to get out of bed and learn to walk again.”

Hamill’s dream is to secure a preceptorship at a VA hospital and fulfill her passion to work with veterans. 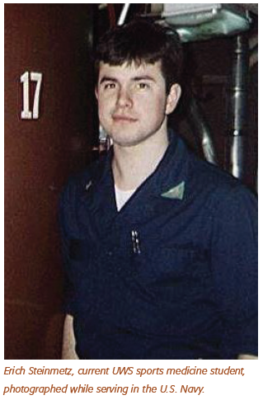 Another student who appreciates the partnership is Erich Steinmetz, who is both a student in the Master of Science in Sports Medicine program and an adjunct faculty member in the massage therapy program. He served in the Navy and worked as a nuclear-trained electrician on submarines. While in the Navy, Steinmetz went through the Panama Canal and walked on an arctic polar ice cap.

“There are too many organizations that forget about how important the service of our men and women are to the security and freedom of the country,” Steinmetz said. “I feel that veterans deserve to be recognized and served in a way that is meaningful to them.”

His military experience has inspired him to become a multidisciplinary therapist. He hopes to eventually work with elite special forces such as the U.S. Navy SEALs or Army Green Berets.

FOR THE GOOD OF THE PATIENT, THE COMMUNITY AND THE STUDENT

The partnership with the Returning Veterans Project also gives students the opportunity to serve and treat the veterans who visit the campus clinic.

“Part of good citizenship is finding ways to give back and serve the community,” said Dr. Joseph Pfeifer, vice president of clinical affairs. “By serving our veterans through the RVP program, we not only help fulfill the patient care and educational components of our mission, but we also provide students with opportunities to experience the joys of service as they contribute to the well-being of those who have served us.”

Service-based opportunities also benefit students as they earn their degrees at UWS.

“It gives students an attitude of service,” Dr. Ewald said. “One of the benefits of service-based internships is the opportunity to engage with a lot of different types of patients with conditions that students might not otherwise see in the UWS campus health center.”

“Veterans have made incredible sacrifices physically, mentally and emotionally,” said Dr. Pfeifer. “Chiropractic and massage therapy services are valuable to and valued by veterans. It is fulfilling to be able to serve that need.”

For Thompson, the care he has received at UWS has been life changing and he encourages other veterans to take advantage of this partnership.

“A lot of veterans don’t want to be touched or think outside the box for their pain management. They are just too afraid,” Thompson said. “If I could say one thing to other veterans about the care at UWS, it would be to give it a shot.” 