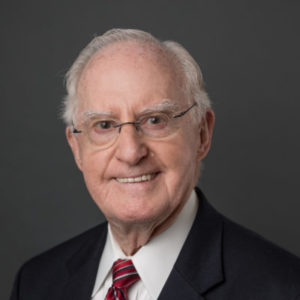 Horace Elliott was elected to the Board in May 2014. He is the immediate past executive vice president of the National Board of Chiropractic Examiners (NBCE), retiring after serving 28 years (1986-2014). He is a graduate of Lamar University in Beaumont, Texas, with a bachelor’s degree in secondary education and taught biology and mathematics for several years.  Prior to joining the National Board of Chiropractic Examiners, Elliott was manager of communications at Bendix Corporation’s Research Laboratories, and was director of administration for the Houston regional office of Price Waterhouse Coopers and director of administration for the Houston law firm of Susman-Godfrey.

As executive vice president of the NBCE, he was responsible for operational and financial affairs of the organization that provides third-party, independent, pre-licensure testing the chiropractic profession required by all 50 states and several foreign countries. The National Board is governed by an eleven-person board of directors. While serving the NBCE, Elliott received an Honorary Doctor of humanities from Texas Chiropractic College; and a Doctor of Humane Letters from the American College of Chiropractors (FACC); and named a Fellow of the International College of Chiropractors (FICC). He received the George Arvidson Award from the Federation of Chiropractic Licensing Boards for service to chiropractic regulation, and prior to his retirement, he received an Honorary Doctorate from Hanseo University College of Chiropractic in Korea and was named the Dynamic Chiropractic’s 2013 Person of the Year.

He has served on several boards of directors, including the Farmington Village Housing Cooperative (president); the National Management Association’s Bendix Corporation Chapter (president); the Greeley Rotary Club (president elect); and the Academic Consortium for Complementary and Alternative Health Care, representing the National Board.

UWS is delighted to announce the new doctor of chiropractic scholarships and the Students First Emergency Relief Grant (open to all UWS students) are now open for applicants! All applications are due September 5, 2022.

UWS scholarships are made possible through donations and institutional funds. Award amounts are determined by scholarship criteria, available funds and other considerations.

Eligibility criteria and scholarship information are available on the website at www.uws.edu/scholarships ... See MoreSee Less