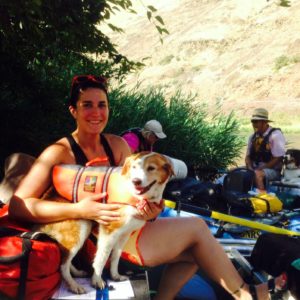 1. Why did you choose UWS?  I choose UWS for its location. After graduating from college I really wanted to move back to Portland but I had zero idea of what I wanted to do. After seeing a chiropractor in Eugene to help with my headaches, he suggested I think about becoming a chiropractor. He mentioned that he went to UWS and suggested I look into attending. After doing some research and seeing that the school offered a master’s degree in sports medicine, I was sold. I’ve always known that I wanted my career to involve sports somehow. Becoming a sports chiropractor blends the worlds of working in a clinic setting with being able to work on the sidelines and in a training room.

2. What has been your favorite class/instructor?  I’ve really enjoyed the Advanced Sports Medicine III class that focuses on rehab. Every week I have been able to use something I’ve learned in the class with a patient. Because of this, both the patients and I have seen great results in their care.

3. What is your favorite part about attending UWS as a student?  It definitely has to be treating patients at the school clinics and in the training room or at master’s events. It’s great to see all the hard work I’ve put into my education come into use while treating patients. It’s also enjoyable being able to interact with patients

5. What do you hope to do after graduation?  My plan A is to apply (and hopefully get) the master’s program fellowship position in January, take my CCSP and DACBSP exams in the next year then get hired as an associate either in Portland, San Francisco or San Diego. My long term goal is to work with either the USA rugby national team or the Olympic rugby 7’s program and eventually work my way to becoming a full time doctor at an Olympic training center.

6. Favorite way to get some stress out from school?  My favorite way to de-stress from school has been playing rugby. I have been playing for nine years. I started my freshman year at University of Oregon and have played my entire time at UWS. I’ve only recently decided to take a break and focus my time and energy on coaching. I now help coach my rugby club’s (ORSU) D2 women’s team. I’m also the head coach for the women’s rugby team at Lewis and Clark. I don’t have much of a life between school and rugby, but it’s definitely worth it. A big moment recently involved me playing in the D1 women’s national championship this past spring, where my team crushed it and won 42-10. How many other chiropractors get to say they’ve won a national championship?

At University of Western States, the doctorate of education in sport and performance psychology with a clinical mental health counseling specialization (EdD-SPP, CMHC) is uniquely designed for students who are simultaneously seeking counseling licensure and advanced sport and performance psychology training to open the door to a wide array of career options. Learn more about the integrated degree from the program directors, Dr. Sarah Castillo and Dr. Michelle Cox. #UWSLife #sponsored
www.youtube.com/watch?v=y4HTVTr0YOU ... See MoreSee Less

On June 18 and 19, UWS staff and students from the Student American Black Chiropractic Association (SABCA) hosted an information table at the annual Juneteenth Oregon Celebration. The two-day event brought a few thousand people to Lillis Albina Park to celebrate and commemorate June 19, 1865, a day that marked the emancipation of enslaved people in Texas (a full two years after the Emancipation Proclamation).

Staff and students shared about UWS degree programs, services available at the Connected Whole Health clinic, and discussed opportunities for partnership with the many attendees who stopped by the booth. ... See MoreSee Less

University of Western States is happy to call Portland, Oregon home. The city of Portland is a vibrant hub of arts, food, music and culture. It’s not surprising the surrounding suburbs offer a similar charm, all within 30 minutes of campus!

If you’re interested in moving to the Portland area, but do not necessarily want to live within city limits, check out some of the highlighted areas both in Oregon and across the bridges to Washington state. www.uws.edu/2022/03/04/portland-suburbs/?fbclid=IwAR3EKnTi3Z8zgr8UjmrJRzAdrlIb3z8vFsv3haAFYSEljh9... ... See MoreSee Less

University of Western States is located in Portland, Oregon. 🌹The Rose City is a go-to destination for those who want to soak up and experience all that makes the beautiful Pacific Northwest special. Day trips ranging from visiting the Oregon Coast, Columbia River Gorge, Smith Rock, Mt Hood and more await.