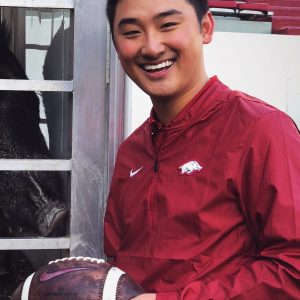 Prior Education or Experience: BS in Kinesiology from Western Washington University; MS in Athletic Training from the University of Arkansas

Bio: Born and raised in the Pacific Northwest, Alex Pham graduated from Mountain View High School in Vancouver, Washington in 2017. Following graduation, Alex moved to Bellingham, WA where he pursued a Bachelor of Science in kinesiology, specializing in movement studies at Western Washington University (WWU). During his four years at WWU, Pham spent time working with their various sports teams assisting in medical care of their athletes. Sparked by the interest in sport medicine, upon graduating from WWU, Alex was admitted and attended the University of Arkansas where he worked and studied in pursuit of his master of athletic training degree. During that time, he worked with the football, soccer and volleyball teams providing medical coverage both on the field and in the athletic training room.

Following graduation from the University of Arkansas in 2020 and becoming  a certified athletic trainer, Pham is currently a student in the University of Western States in the doctor of chiropractic program and serves as the Associated Student Body (ASB) president.

Why did you choose UWS?

There were many chiropractic physicians that I knew who came from UWS and encouraged me in my decision processes to choose the university. As I got to know the school a bit more, I recognized that it was the place for me, especially with their emphasis on evidence-based practice. I strongly believe that in my future patient care, I want to make sure that I’m providing patients with what is best for them based on the best available evidence. Chiropractic care has had negative publicity, but I believe that UWS is helping change that narrative in training quality health care professions that will show the public that our field does change lives for the better.

Why did you choose your program/concentration?

Chiropractic, for me, has always centered around the notion that “movement is medicine.”  It is important for us to encourage everyone to move and that they have the power in their rehab. I have seen it time and time again, where patients are afraid to move because of all catastrophic things they have heard about their conditions, but the power of just giving them permission to move, lights up their world and they can see how much a change it can have for them. I want to be a leader in this field and encourage further evidence-based practice in chiropractic care to further the professions’ respectable relevance in the medical community.

What has been your favorite class/instructor?

Easily my favorite instructor has been Dr. Cortny Williams who teaches the biochemistry series in the chiropractic program. Coming from someone who was awful with anything chemistry related in undergrad, being able to learn from someone who brought optimism and passion to her teaching everyday made learning the material much more enjoyable. I was pressed to study more efficiently and the gratification I had in not only passing the classes but passing with high marks, made my time in the biochemistry series with Dr. Williams, something that I look back on and know I worked so hard, and it paid off.

What is your favorite way to relieve stress outside of the office and classroom?

I like to turn off my phone, unplug from technology and go hiking or fishing. Born and raised a Pacific Northwesterner, there is so much to see and do outdoors. At the same time though, I do love going out to grab a bite to eat with friends or trying out one of the many great breweries in town!

What do you hope to do after graduation?

After graduation, I hope to obtain a residency and then work for the VA in Seattle. Having friends and family that are veterans, I know first-hand how much we are in debt to them for their sacrifice and that working for the VA is my way of giving back to them. I believe there is never an instance where helping our veterans is ever enough and that more should be done to take care of them.