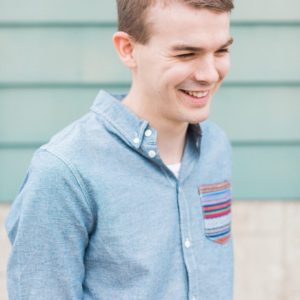 Prior Education or Experience: Bachelor of Science in Human Biology from Ambrose University in Calgary, Alberta

Why did you choose UWS?

When I was trying to decide if I wanted to go into chiropractic school, I shadowed a doctor who actually didn’t attend University of Western States, but said that if he was going to school now he would have. His advice to me was to find the city that was the best fit just as much as the school would be, but suggested that I definitely check out UWS. After that, I narrowed it down to three schools but after touring at UWS, I knew it was the place for me. The people at the school were super friendly and personable when I looked around and on top of that the class that I sat in on was fantastic and the campus looked great. After I saw the anatomy lab, I knew I would attend UWS. Also, my wife loved the city of Portland for the culture and going wherever she would be happiest also made sense.

Why did you choose your program/concentration?

I always have wanted to be able to help people and so medicine was always something I wanted to pursue. I did not want to spend all my time with people who were super sick, but instead wanted to help people who were already fairly healthy to live even healthier lives. When I learned about chiropractic care in a sports injuries and rehabilitation class, it made sense to me and I decided it was what I wanted to do, even though I had never even been to a chiropractic physician myself.

What has been your favorite class/instructor?

Spinal Disorders was my favorite class I took in the program here. I remember being done 5th quarter and feeling like I had so much knowledge in my head, but didn’t really know how to apply it or what to do with it. That class changed the way I was able to think about people presenting with injuries and how to diagnose them. Spinal Disorders was the class that turned me from a student in a science program to a DC student, because after I finished taking that class I felt like I started actually thinking like a doctor.

What is your favorite part about attending UWS as a student?

I love the student body and the community here at UWS. All the students and professors are here to help each other succeed and become the best chiropractic physicians they can be. Upper quarter students are almost always willing to answer questions about classes or how to perform certain adjustments and fellow classmates are pretty much always willing to share the resources they have found to help study or the information they got from the professors at the school. On top of that, all of the professors are as helpful as they possibly could be trying to help people succeed as much as possible.

What did you miss most about Canada during your time at UWS?

I love the Canadian winter. One of my favorite things to do is to go to the outdoor rink and play pick up hockey with friends to kill a Saturday afternoon, but that is not possible here in Portland. The winter was definitely the hardest part for me here at school, because I love cold air with a clear blue sky and that doesn’t happen nearly often enough during the winters here in the Pacific Northwest.

What do you hope to do after graduation?

I plan on heading back to Calgary to work in a clinic there. I want to associate and learn from someone with much more clinical experience than me. From there, I hope to either buy into the practice that I associated at or to eventually open up my own practice.

I do a large amount of stuff away from school. I have taken every Saturday off the entire time here at UWS so that I can spend time with my wife and explore the city and surrounding area. On top of that, we were involved in our church community here so spending time with people from there on a weekly basis and being able to talk about things not related to school at all was helpful too. My favorite way to relieve stress is to play hockey and I was able to join a team just across the river [in Washington] with a few other people from school. Playing hockey definitely helped me relax and being on the ice was a great way to not worry about school and just focus on the sport instead.

Timeline PhotosHAPPY WORLD SPINE DAY!!! 🌍🌏🌎
We hope you get #back2back this #worldspineday!

Whole-Person Health is a core value of University of Western States. We promote physical, mental and emotional wellness in all facets of the UWS experience.

The NCMIC Fitness Center in the new UWS campus is roughly 4,000 square feet and open to the UWS campus community 7:30 a.m. - 6:30 p.m. Monday through Friday. *Face coverings and distancing are required in the fitness center and locker rooms at all times. ... See MoreSee Less